Sampson wasting no time with Gordon 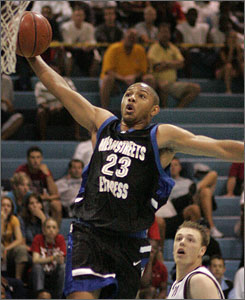 Almost as soon as Eric Gordon made his commitment to IU official, I wondered how his addition would jive with the veterans on the team. Regardless of his considerable talent, Gordon remains a freshman with no experience at the college level, and it is interesting, if not a bit silly, to think that a hardline guy like Kelvin Sampson might wait and phase Gordon in over the early part of the season, rather than anoint him before the season started.

Turns out, I was being silly. Sampson has made Gordon “the guy” already:

He has been a practicing Division I basketball player for less than 12 hours, but Eric Gordon does not hesitate for a second. When he is open, in rhythm, in the structure of the Indiana offense, he shoots. He knows exactly who he is.

IU coach Kelvin Sampson told Gordon before practice began: “Don’t defer. Play like you’re the guy.” No one here is kidding anyone. Gordon already is wearing a crimson jersey in practice, and in case it’s not clear what that signifies, it’s the same color as star center D.J. White has on his back.

Good to see that Gordon is a starter from day one. There’s no doubt D.J. White will continue to be the de facto team leader, but sometimes experience is trumped by sheer talent, of which Gordon has an incredible wealth. Hopefully he and D.J. can balance those responsibilities to the team’s greater benefit as the season picks up.