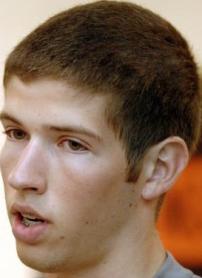 The newest member of Kelvin Sampson’s 2008 class — the sweet-shooting Matt Roth — has had time to discuss his decision to leave the friendly confines of Peoria and head East to Bloomington, and it’s much of what you would expect. Matt faced an archetypal decision, one not unlike the same ones so many prospective college students make:

“Academically, they’re all great schools and I couldn’t go wrong,” Roth said. “I decided I wanted to be able to play for Big Ten championships and play for a national championship every year I’m there. I’m a little relieved to get it over with. Now I can focus on my senior year.”

“I don’t think Coach Sampson missed a game of mine in Vegas,” he said. “He saw me play really well and he told my coach he was going to make an offer after the tournament. (Indiana) emerged a little bit later, but I had visited the campus a couple of times unofficially and had a good feel for it. It’s going to be great to compete at that level.”

“I owe my family a lot,” he said. “I’ve spent a lot of time talking with them about this. They’ve been very supportive.”

“I wouldn’t change a thing about it,” he said. “It’s an opportunity of a lifetime. It’s almost sad that not every kid can go through this. It’s an honor and a privilege knowing what I’m going to do. The right decision is for me to go to Indiana. There’s no looking back and I’m happy with my decision.”

And then Papa Roth:

Dave Roth said the idea of their son playing for the hometown Braves was an attractive one, but in the end, they left the decision to Matt.

“It wasn’t about what we wanted,” Dave Roth said. “He’s 18 years old now and it’s more important he did what he wanted. That’s what he did. He made a great decision.”

“What it came down to was, did Matt want to play in the Big Ten or did he want to play close to home?” Brown said. “When he told me that’s what he was thinking, I said, ‘Do you want to have your family, coaches and ex-teammates watching your home games or do you want to go for a dream you have?’ Since then, he’s done a lot of fishing.”

That’s a lot of blockquoting to parse, but it’s clear that the decision came down to Matt’s dream of playing in the Big Ten. And really, who could blame him? No knock on Bradley, which has an excellent mid-major (and rising) program, but the idea of playing all your games in front of the same people you hung out with in high school while a historically successful, tradition-laden program lies just down 1-74, well, who wouldn’t call that a mistake?

Thousands of high school seniors face this decision every year. Do I go to the local school with my friends and parents nearby, or do I branch out and take a risk? I’m glad to see Matt made the same choice I did. Hopefully he benefits from it as much as I have.