Jamarcus Ellis is happy to be a Hoosier 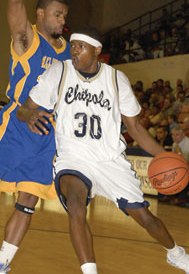 I was able to catch up with Jamarcus Ellis after the recruit game at New Albany and here’s what the National Junior College Player of the Year had to say:

Inside the Hall: What was it like for you playing in front of the IU fans for the first time? Was this what you were expecting?

Jamarcus Ellis: Well, I wasn’t expecting it for this game, but you know IU fans are very supportive. The coaches told me it was going to be sold out so when I got here I looked at the gym and I was like whoa, I wasn’t expecting this many people. It’s good because we’ve got fans supporting us and that makes us work even harder.

ITH: Were you used to these types of crowds when you played at Westinghouse in Chicago?

JE: Yeah, the city championship games would be at the United Center and I’m used to playing in front of big crowds but not for the whole season. At Chipola it wasn’t like that. The gym wasn’t big enough. At IU they seat 17,500 and every game is sold out. It makes me feel real good to come to a school and a basketball town where I feel wanted.

ITH: So was that the deciding factor for you to pick IU, is that it was a basketball town?

JE: Yeah that and the graduation rate.

JE: Cubs. I’ve always liked the Cubs since they had Sammy Sosa.

ITH: Did you cheer for the Sox when they were in the Series?

JE: Oh yeah, I cheered for them. I wished it was the Cubs though.

JE: I like it. I came down here in August, the day after my birthday, last year. It was an unofficial. There weren’t many people there. Just the atmosphere and just by it being a college town I really liked it because it’s very peaceful from where I stay. Then I came in October, towards like the 30th, around Halloween, homecoming time. It was during school. They had a homecoming football game and they had a scrimmage. It was everything you’d ever want. There was like 10,000 people.

ITH: What do you see yourself bringing to the team this year?

JE: Just being a good teammate. I just look to do a little bit of everything, get D.J. and E.J. involved. Just playing my role and getting the ball in motion. I like to do a lot of things, rebound, pass and I like to score but that only comes when my team needs me. They need me to do a lot of different things because we’ve got scorers already. I’m looking forward to getting better this season.

Thanks are in order for Mr. Ellis for taking the time to talk with us. Look for Lance Stemler’s thoughts on the upcoming season, including an update on his ankle, on Saturday.