Around the Hall: Is De’Ron Davis ready to break out? 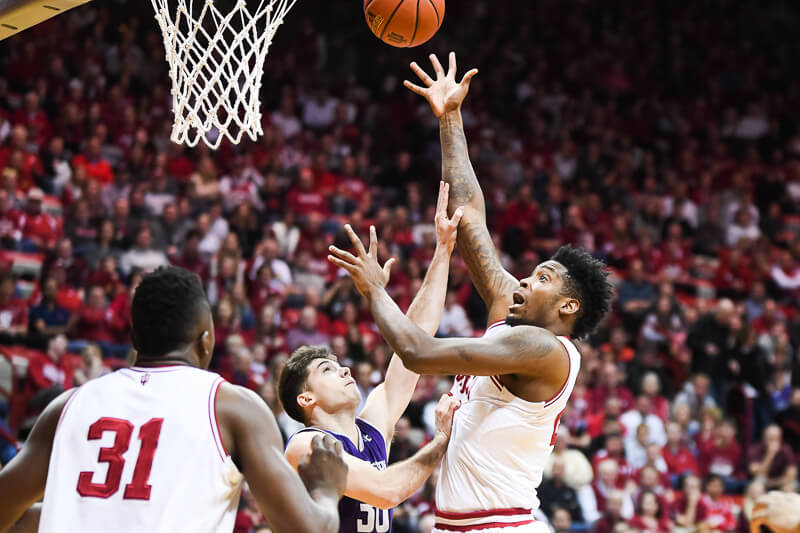 Eric Bossi of Rivals.com looks at potential breakout sophomores from around the country and Indiana’s De’Ron Davis makes the list:

Bossi’s memory: The first time I saw Davis play, he was actually in the seventh grade. I stopped by to see a friend’s kid play in a youth tournament down the street from my house and it was comical to watch Davis — who was already at least 6-foot-7 — as 12-and 13-year-olds tried to stop him. He’s one of the rare kids who had a massive junior high rep and panned out as expected.

Why he’ll be better: Hoosiers head coach Archie Miller says Davis has lost 20 pounds and is in his best shape ever. He’s always been skilled and a scorer, so improved shape and quickness should equal much improved production if he can limit silly fouls that have kept him off the floor.

Over at ESPN Insider ($), Jeff Borzello examines the most interesting recruitments in the class of 2018 and notes that Indiana has made up ground for Romeo Langford:

The Hoosiers are hoping to keep Langford in-state for school, and will go in for a home visit Wednesday. He’s also visiting Bloomington for Hoosier Hysteria, IU’s opening-night event. Louisville is still the likely leader, but Indiana has closed the gap and Kansas is also making a push.

In his college basketball notebook at WDRB.com, Rick Bozich writes that he believes Indiana’s ceiling is higher what is being predicted in the preseason magazines:

My take on IU is that Miller’s first team has a ceiling of fifth place and a floor of tenth. Michigan State, Purdue, Minnesota and Northwestern are all likely stronger. The Hoosiers will be in a scrum with Wisconsin, Michigan, Iowa, Maryland and Penn State in the next wave, ahead of Ohio State, Illinois, Nebraska and Rutgers.

The development of center De’Ron Davis, improvement in defense and turnover margin and health will determine where the Hoosiers finish.

Zach Osterman of The Indianapolis Star looks at five burning questions for IU entering the season:

If you want to swerve defense/turnover flashbacks, stop reading now.

They’re unavoidable, but we’ll start with defense. Indiana finished 104th nationally in defensive efficiency a season ago, and last in the Big Ten in points per possession allowed in conference play. These numbers manifested themselves in one frustrating performance after another. You remember.

Enter Miller, who constructed top-50 defenses in each of the past three seasons at Dayton.

CBSSports.com lists the top five games in each conference and IU-Purdue makes the cut among Big Ten contests:

The Hoosiers have some mystery to them. Who will be the leader? How will this team resemble Archie Miller’s prior teams at Dayton? Purdue figures to be a stronger team this season, but winning in Assembly Hall could be a tough ask if Indiana’s able to grow into a respectable, tough ball club by this point.