Notebook: Blackmon Jr. leads Hoosiers in win over No. 3 Kansas 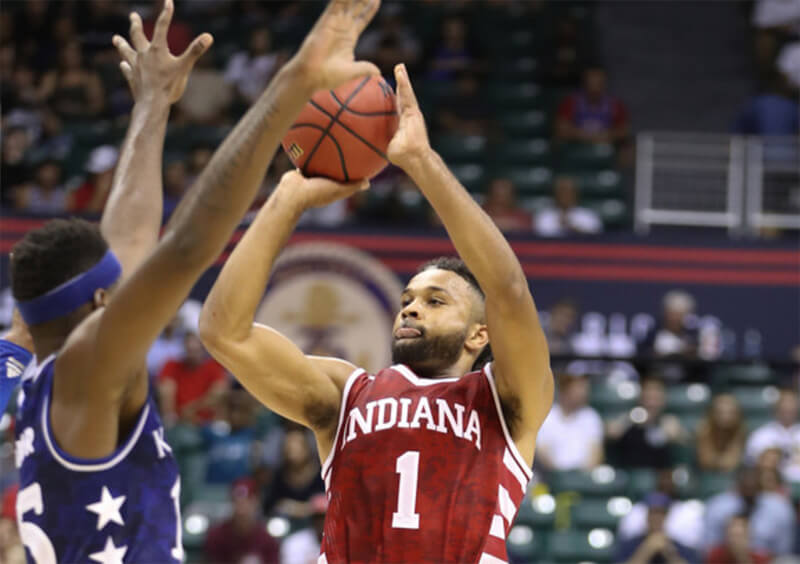 Last season when Indiana made the trip to Hawaii for the Maui Invitational, it didn’t end very well. This year was a different story. James Blackmon Jr. led the Hoosiers with 26 points to help No. 11 IU upset No. 3 Kansas in a 103-99 overtime win in the Armed Forces Classic at the Stan Sheriff Center.

With the graduation of Yogi Ferrell, one pressing question for the Hoosiers was who they would have out on the floor to make a play when the game was on the line.

On Friday night, that go-to guy was Blackmon.

Whether he was hitting from long range or driving in the paint, Blackmon delivered down the stretch. In the final 2:08 of regulation, he was the only Hoosier to score as his eight points helped send the game into overtime.

He also shot well from the free throw line, sinking six of his seven attempts. In the first half, Blackmon was relatively quiet. He entered halftime with just four points. But once he got going, his leadership showed. He took control and his presence was felt.

“I’m just proud of him,” coach Tom Crean said. “It’s been a long road to get him back. He was on the court in the end of the game doing well on the offensive and defensive end. I know it’s November, but it was a great feeling to watch him have the game he had.”

Behind Blackmon, Thomas Bryant followed with a double-double 19 points and 10 rebounds. Curtis Jones had 15 points, OG Anunoby scored 13 and Robert Johnson added 10. Juwan Morgan also had 10 rebounds. Ten Hoosiers saw the court in a combination of lineups and all managed to make contributions.

“We played against a great team, a team that is everything they were expected to be and more,” Crean said. “It was an incredible win. Our guys absolutely dug down and always believed. We had about 30 seconds of that deer-in-the-headlights look when it went into overtime, but we got out of that in a hurry. Everyone came and made big plays.”

In a game with 63 fouls between the two teams, IU had to overcome Johnson, Bryant and Morgan all fouling out. The Jayhawks also had three starters foul out. IU’s bench was able to step up and deliver and that’s where Kansas fell short. The Hoosiers also out-rebounded Kansas 50-39.

At times, IU made it harder for itself than it needed to be. It took them almost seven minutes to hit their first 2-point shot of the game. When it mattered most, IU hit their free throws. As a team, it was 6-of-6 in overtime.

“In a game like this, that’s measured like that, that’s so nip-and-tuck, every play is big,” IU coach Tom Crean said. “You just have to keep finding a way to be resilient, and these guys did.”

Jones was the difference-maker for IU in extra minutes with seven points. He had a deep 3-pointer to increase the IU lead to four with less than 2 minutes left. He wasn’t intimidated facing a top-ranked team and didn’t look like a freshman on the court.

He kept his composure, hitting two key free throws and a game-sealing dunk in the final seconds to give IU the win.

Nice way to finish off the first game. https://t.co/vrdW7uIumb

“The stage doesn’t matter to him and I think that’s what’s really important,” Crean said. “I think at one point we had three freshmen in there in overtime and they all contributed. It’s really not about what spot you’re in, just get a spot.”