Hoosiers struggle dealing with “rut” in 72-65 loss at Northwestern 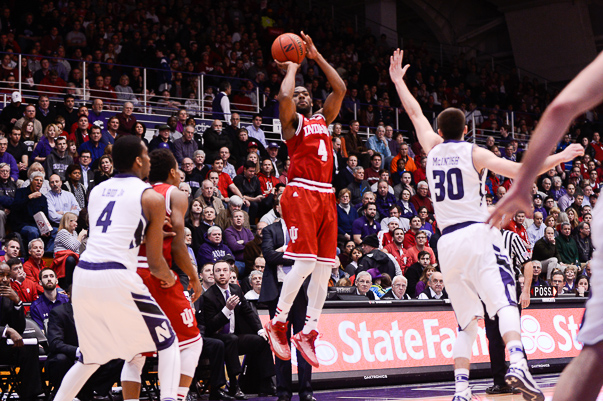 Indiana found itself in an unfamiliar position on Wednesday night in Evanston, Ill.

With their shots not falling in the second half — whether it be layups, jumpers, 3-pointers and even free throws — the Hoosiers were forced to play through their longest rut of the season against a surging Northwestern squad.

This rut — a scoreless drought from the 13:23 mark to the 3:17 mark of the second half — was far too much for Indiana to overcome. By the time the final buzzer sounded, the Hoosiers left Welsh-Ryan Arena with a 72-65 loss, their sixth in nine games on the road this season.

“The one thing we have got to learn is when the shots are not falling, you define how good a team you are going to be by still finding a way to win when it’s not there,” Indiana coach Tom Crean said. “And that’s where the defense, the rebounding, the stops, all those things come into it. And we’ve had some of that. Tonight we didn’t have that.”

Wednesday’s game was a story of two halves. The result was just overwhelmingly decided in the second.

Indiana’s first half was defined by hot shooting, as it sliced through Northwestern’s 2-3 zone time and time again for baskets inside and out. They finished the first 20 minutes with a 9-of-14 rate on 3s.

But the Wildcats found their looks, too. The Hoosiers had trouble stopping 7-foot Alex Olah inside. They had even more trouble stopping open looks from the perimeter off their 1-3-1 zone. By the end of the first half, despite the Hoosiers hot shooting, the game was tied at 40.

“Giving up 40 points,” sophomore Troy Williams said, “There was no defense.”

The rut, though, began early in the second half after the teams exchanged multiple baskets — and then at 51-48, Troy Williams had a layup attempt blocked by Scottie Lindsey that turned into a Tre Demps corner 3-pointer in transition with 12:30 to go.

Following that play, Indiana got to the free throw line for a 1-and-1 – its first of two that would set the tone for the remainder of the half. Williams would miss the front end of that 1-and-1. Demps would hit a jumper to extend the Wildcats’ lead to eight.

After both teams traded misses — including another missed front end of a 1-and-1 from Yogi Ferrell — an Indiana turnover and ensuing foul late in the shot clock allowed Northwestern to drain even more time off the clock before hitting a floater to extend its lead to 10.

That sequence would become the start of more than a 10-minute scoring drought for the Hoosiers. They rushed shots against the zone to try to trim their deficit.

They missed open looks. At one point they were 1-for-12 from behind the arc in the second half.

“We settled a lot,” junior Nick Zeisloft said. “And we should definitely not have done that.”

They couldn’t rebound many of those misses, either. During their drought, Northwestern had 10 defensive boards to Indiana’s three offensive rebounds.

And while Northwestern wasn’t scoring at a great pace, either — as the Hoosiers defense tightened up — the Hoosiers weren’t getting anything to fall. Two straight layups for Northwestern at the 5:18 and 4:09 marks after three straight empty possessions led them to a 62-48 lead by the time Indiana would make its next basket with just 3:17 to go.

“It won’t be the last time we hit a rut,” Crean said. “And everybody goes through it. It’s how you climb out of it that makes the difference for your team.”

Indiana finally found its way out of that rut, but it was too late. In their nine final trips down the floor dating to the 3:17 mark of the second half, the Hoosiers would score 17 points. Northwestern, despite three turnovers in that span from Indiana’s press — which Crean admitted he should have installed earlier in the game — was able to seal its fourth straight win in Big Ten play (for the first time since the 1966-67 season) at the free throw line.

For Indiana, it meant yet another road win opportunity wasted — its last of the season — with Iowa and Michigan State looming to close out the regular season.

“The shooting isn’t going to change,” Crean said. “Those are the shots we’re going to take the next game if they’re there. But we’ve got to do a better job of playing through when those ruts come.”