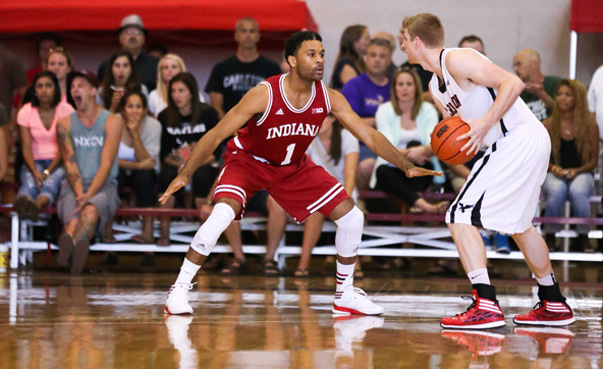 With the start of the fall semester underway and less than five weeks until the official start of practice, it’s time to begin looking ahead to the 2014-2015 season.

Today, we begin our Big Ten preview with a look at five freshmen, listed in no particular order, who could make the biggest impact next season.

D’Angelo Russell, Ohio State, guard — It’s not easy for freshmen to crack the starting lineup in Columbus, but the 6-foot-5 Russell, a Louisville native and McDonald’s All-American, looks poised to do just that. The Buckeyes lost Aaron Craft and Lenzelle Smith Jr. to graduation and have Shannon Scott and Sam Thompson returning on the perimeter. While Scott may be the best perimeter defender in the Big Ten and Thompson is an elite athlete and finisher, neither is known for scoring. That’s where Russell, the highest ranked incoming Big Ten recruit, should make an impact from day one. With his size, athleticism and versatility, Russell is dangerous off the dribble and in transition and is also a capable shooter from distance.

Romelo Trimble, Maryland, guard — Mark Turgeon lost a large chunk of his roster in the offseason via transfers, but welcomes a strong recruiting class led by Trimble, a McDonald’s All-American guard from nearby Upper Marlboro. The departure of point guard Seth Allen, who transferred to Virginia Tech, means that the 6-foot-2 Trimble is likely to take over in the backcourt immediately and play alongside Dez Wells, the team’s leading returning scorer. A prolific scorer in the prep ranks at Bishop O’Connell, Turgeon will need Trimble to play more facilitator than go-to scorer in his rookie season. The Terps are one of the tougher teams to forecast this season in the Big Ten as they had so much offseason turnover, but much of their success will rest squarely on the shoulders of Trimble.

Leron Black, Illinois, forward — The Illini have one of the deeper backcourts in the Big Ten, but their frontcourt lacks experience besides Nnanna Egwu. The 6-foot-7 Black could be the answer at the four for John Groce as the other primary competition at the position, Darius Paul, was suspended for the season and then opted to transfer. A one-time Baylor commit, Black has a solid mid-range game, is versatile enough to guard the perimeter if needed and has length that allows him to play taller than his height. Groce will have plenty to figure out in terms of a backcourt rotation, but the frontcourt situation seems pretty clear with Egwu and Black.

James Blackmon Jr., Indiana, guard — Blackmon Jr., a 6-foot-4 guard, is the fourth McDonald’s All-American that Tom Crean has recruited to Bloomington and like the three before him, the Marion product should begin the season as a starter. Blackmon Jr. originally committed to Indiana before his freshman season of high school, but later de-committed and Crean then won his services in a heated recruiting battle that also included Kansas, Kentucky, Louisville, Michigan, Michigan State and North Carolina. The early returns for Blackmon Jr. are encouraging as he averaged a team-high 18.8 points on Indiana’s five-game tour of Canada in August. Arguably the top incoming shooter in the country, Blackmon Jr. should help the Hoosiers rebound from an average season of perimeter shooting and spread the floor for point guard Yogi Ferrell, who was the constant focus of opposing defenses last season.

Kameron Chatman, Michigan, forward — It’s no secret that John Beilein likes to play small at the four and the 6-foot-7 Chatman, a Portland native, started all four games of Michigan’s trip to Italy last month in that position. It was a major coup for the Wolverine staff to pull Chatman to Ann Arbor from a strong list of West Coast suitors and he’ll have big shoes to fill from day one as he takes over for Glenn Robinson III, who left early for the NBA. As UMHoops.com noted recently, Chatman showed that he’s capable of a little bit of everything in Italy as he averaged 9.5 points, 4.3 rebounds and 2.5 assists. Furthermore, Chatman will give Michigan a different look than Robinson did as he’s not the same level of athlete, but is a better passer and midrange shooter.