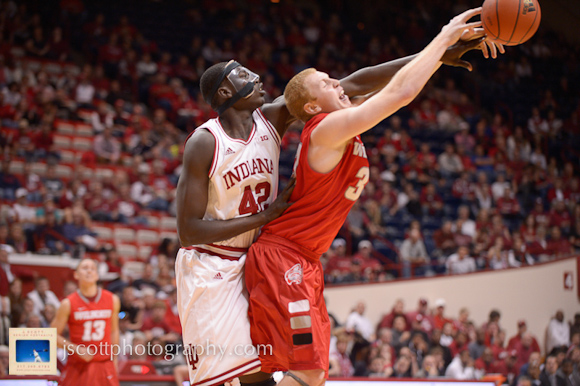 Indiana freshmen Hanner Mosquera-Perea and Peter Jurkin have yet to be cleared to play by the NCAA and Tom Crean was asked to provide an update on their status following Thursday’s 86-57 exhibition win over Indiana Wesleyan.

The process of determining the eligibility for both players is still ongoing based on Crean’s comments.

“What I can say about that is that we go through a lot in a program,” he said. “There’s situations that are always going to arise and every one of them has got a process to it. And we’re in the middle of that process. We just are. That’s the extent of it. They’re two great kids that are trying to get better every day and it’s not like it’s anything that we’re dealing with that just came up. It’s been a process for some time. And that’s really where we’re at with it.”

Mosquera-Perea, who was in uniform, sat out against Indiana Wesleyan with a left foot injury that has hampered him for much of the summer and fall.

Jurkin, a native of the Sudan, played 11 minutes, scored four points and grabbed one rebound. Crean said he was encouraged by how Jurkin played, but acknowledged that he’s very much a work in progress.

“He’s gotta learn how to play,” Crean said. “There’s not one guy on the team that doesn’t want to see him succeed. And what I need is, I need them to start being harder on him because he’s pretty good. Again, he needs to play. He needs that time. He needs to learn how to use his length and he’s not strong enough yet. There’s no way around that, but he needs the chance to play so that he can grow into it because he’s an extremely willing learner.”

With Indiana’s season opener against Bryant just eight days away, there’s still no definitive timetable on when a determination on the eligibility of both players will be made.

“I wish I could answer that. I wish I could. I just don’t (know),” Crean said. “We’re in the midst of it. It’s like anything else, it’s daily. You don’t get ahead of yourself, you just keep staying in the day with it, the moment with it and keep working the best way that you can and see what’s next.”