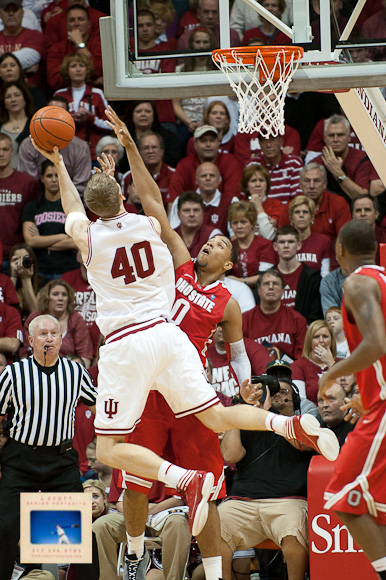 With the midway point of the Big Ten season approaching, Inside the Hall takes a look at the sleepers, contenders and the favorite to take home the conference’s player of the year award:

THE SLEEPERS (LITTLE CHANCE TO WIN, BUT A MENTION IS WARRANTED)

Tim Frazier, Penn State — Frazier is basically a one-man show in State College and his numbers bear that out. He’s leading the Nittany Lions in points, rebounds and assists. His assist rate of 46.4 is second nationally. The reason he won’t be under real consideration? Penn State is headed for a bottom two finish in the Big Ten.

Robbie Hummel, Purdue — One of the better stories in all of college basketball this season, Hummel’s steady presence has the Boilermakers right in the thick of the conference race. His 15.4 points and 6.3 rebounds per game both lead the team.

Meyers Leonard, Illinois — The sophomore big man gets the nod over his junior teammate Brandon Paul because he’s the more efficient player. Leonard is in the top 150 nationally in effective field goal percentage and is third in the conference in defensive rebounding percentage and block percentage.

Keith Appling, Michigan State — Questions lingered before the season about Appling’s ability to make the transition to point guard, but his play there has been steady thus far. He’s in the top ten in the league in assist rate and free throw rate. He’s also among the Big Ten’s best defenders and transition players.

John Shurna, Northwestern — Shurna may have cracked the contender list had his Wildcats not dropped two straight following an upset of Michigan State on Jan. 14. He’s the Big Ten’s leading scorer at 19.2 points per game and has knocked down 51-of-120 of his 3-point attempts (42.5 percent).

William Buford, Ohio State — Being the second-leading scorer on the league’s best team is enough to land Buford consideration. While his percentage from 3-point range is down almost seven percent from a season ago, Buford is contributing in other ways. He’s third on the Buckeyes in rebounding and second in assists. His leadership could determine the Buckeyes fate come March.

Trey Burke, Michigan — Burke’s appointment to this list may come as a surprise, but he’s been the Wolvernines most reliable player all season. And Michigan is currently in a three way tie for first place. The freshman from Columbus, Ohio is fifth in the conference in assist rate (30.3), second on his team in scoring (14.6) and most importantly, has filled the gap left by Darius Morris’ early departure for the NBA Draft.

Jordan Taylor, Wisconsin — A little over two weeks ago, the Badgers looked overmatched after dropping three straight conference games. Now, they’re the league’s hottest team in large part because of Taylor’s improved play of late. In a pair of wins against Northwestern and Illinois last week, the senior point guard averaged 17.0 points, 6.0 rebounds and 5.5 assists.

Cody Zeller, Indiana — The presence of Zeller has elevated the Hoosiers from the basement of the Big Ten to a top 25 national ranking. He’s leading the league in effective field goal percentage and is in the top ten in offensive rebounding percentage. Zeller is pacing IU in scoring (15.4 ppg) and rebounding (6.4), and is among the 25 finalists for the Wooden Award for national player of the year.

Draymond Green, Michigan State — It’s finally Draymond’s team to lead in East Lansing and the senior forward has the Spartans in a three-way tie for the conference lead. Green is the Big Ten’s second best defensive rebounder and the only player in the league who is averaging double figures on the glass (10.2 rebounds per game). He also leads the Spartans in scoring at 15.0 points per game and is second in assists with 3.5 per game.

Jared Sullinger, Ohio State — Sullinger is a solid favorite at this point and may strengthen his position if the Buckeyes ultimately pull away from the pack in the conference standings. Consider these conference ranks for the Ohio State sophomore: effective field goal percentage (2nd), defensive rebounding percentage (1st), free throw rate (5th), steal percentage (8th), fouls drawn per 40 minutes (2nd). The scary part is that Sullinger may only continue to get better as his health and conditioning improve over the next two months.

Filed to: Big Ten Player of the Year